Handbook of the Mammals of the World, Vol 3 (Primates)

Everybody knows that we are members of the mammalian Order Primates, but ask somebody to name some of our cousins and they would at best come up with five or six of the most widely known.

This, the third volume of Handbook of the Mammals of the World, counts more than 470 of them: 138 species of prosimians—the lemurs, lorises, pottos and tarsiers in Africa and Asia; 156 species of monkeys in the New World tropics; another 158 monkeys in the Old World tropics; and 25 apes, 19 of them gibbons along with six chimpanzees, gorillas and orangutans. Much of this extraordinary diversity has been discovered only in the past two decades. In the 1980s the count was 180 species. Now we know so much more of their diversity, and this volume of HMW presents them in all their remarkable variety of shapes, sizes, colors, habits and specializations. 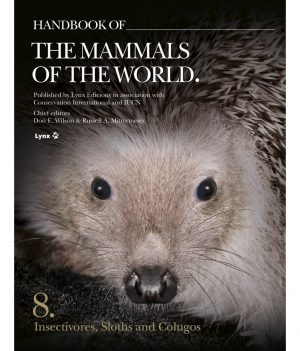 Handbook of the Mammals of the World, Volume 8 (Insectivores, Sloths and Colugos)