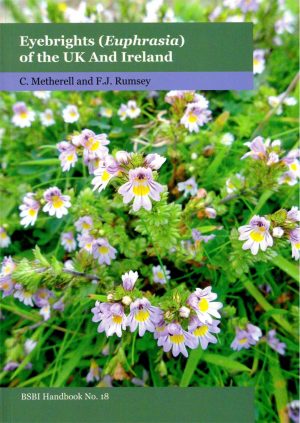 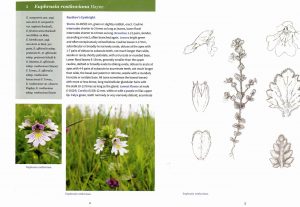 Eyebrights of Britain and Ireland: BSBI Handbook No 18 (Euphrasia)

This important new handbook has been long awaited and is designed to encourage more botanists to develop an interest in Euphrasia and thereby add to the understanding of this group of plants.

Eyebrights are unassuming plants that are found in a wide range of habitats. Identification, especially in the field, is often difficult and the emphasis of this handbook has been to provide a field guide, something that up to now has been lacking, and not focus in detail on taxonomic issues, particularly as modern DNA analysis is still ongoing and nomenclatural changes may yet be made. Where taxonomic status is uncertain, this is highlighted.

The taxonomy is based on previous work, but the species accounts have been rewritten to improve clarity. The descriptions for hybrid species are based on new work undertaken by the authors both in the field and with herbarium material. The book deals only with species and hybrids from the UK and Ireland. European material has been examined but the keys and descriptions have not been tested for validity outside of the UK and Ireland.

Euphrasias are annual, hemi-parisitic, monoecious herbs. They are a highly variable in morphology, as a result of both genetic complexity and a high degree of plasticity to environmental conditions. Depending on the species concerned, there are grounds for taking both a narrow and a more wide-ranging approach to species definition, but for consistency the authors have adopted a more restrictive approach and excluded, as species, examples that could be described as hybrids. The authors have also endeavoured to avoid overlap between species descriptions to assist field identification.

Introductory chapters provide: a general description; indicate characters important for identification; cover the historical background; provide notes on classification, ecology, and hybridisation. Three sets of keys are provided, on the basis that no single key will work all the time but that by using multiple keys the chance of success will be substantially increased. Even so, it is estimated that it will be be difficult to make a certain determination 15-20% of the time for species and 20-50% of the time for hybrids.
Comparative tables are provided to help elucidate groups of species that are highly related/easily confused.

Each detailed species description is accompanied by several high-resolution colour photographs, usually showing the whole plant in situ as well as key features. There are also detailed b&w illustrations of the plant and plant parts. In each species entry, characteristics of hybrids formed with that species are provided in brief, in a tabular form, with cross references to the main hybrid entry if there is one, and sometimes a generalised key.
The main hybrid entries follow the species accounts and are presented in the same format.

A glossary, bibliography and index of Latin and English names are also provided. 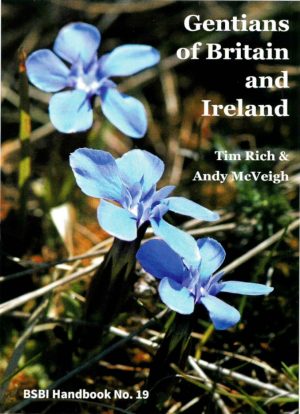 Gentians of Britain and Ireland