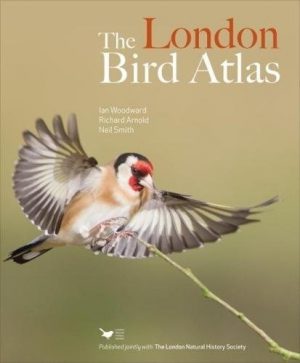 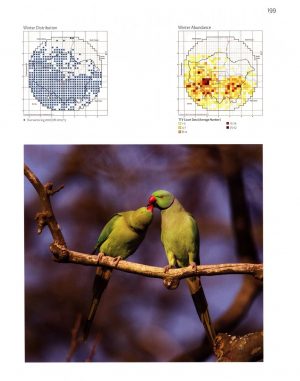 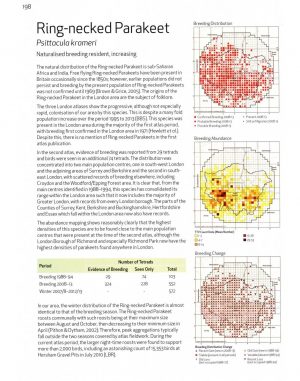 An authoritative and detailed account of the regularly occurring birds of London with analyses of the changes to London’s bird population based on a comprehensive survey run in conjunction with the British Trust for Ornithology’s National Bird Atlas project.

Published jointly with The London Natural History Society, this atlas contains records of 200 species that were observed in the region, covering an area within 20 miles (or approximately 32km) of St Paul’s Cathedral. This area covers the whole of Greater London and parts of Hertfordshire, Essex, Kent, Surrey and Buckinghamshire. The atlas documents the breeding and wintering distribution of the birds in the area and identifies changes in distribution since the previous two breeding atlases of the London area, in 1968-72 and 1988-94.

A full introduction describes the methodology and this is followed by illustrated species accounts, each with up to five maps covering breeding distribution; breeding abundance; breeding change; winter distribution and winter abundance.

Richard Arnold, one of the authors writes that “During field work for the London Bird Atlas almost two hundred species of birds were recorded in the London area. For a largely urban area, this is still an impressive tally despite the sad decline of some once common species, like the tree sparrow. The 60 families of birds recorded in the London area represent just over a quarter of the total number of bird families in the world; a surprising richness in avian diversity.”
The London Bird Atlas brings together into a single volume, the analysis of almost a million bird records and research to tell you which birds are doing well, which ones have declined or held steady, and what the changes have been in relation to previous distribution surveys. It is also the first London bird atlas to include maps of bird abundance and to show the distribution of wintering birds. It includes some information on where to watch birds and other wildlife in London. It will be an essential source of reference for London’s birders and others interested in urban wildlife.

On average, around 200 species of birds are recorded each year, with around 370 species recorded in total, in a varied and rich matrix of habitats from grassland and woodland to wetland sites and the Thames estuary. The London area has some of the world’s premier urban nature reserves which provide outstanding opportunities for bird study and photography, close to the homes of millions of people.

Ian Woodward is from Chingford in north-east London and has lived in this area for most of his life. In 2005, he became the Regional Representative for the British Trust for Ornithology (BTO) in north London, organising BTO surveys in the area and working closely with the London Natural History Society (LNHS). Ian has worked for the BTO as a Research Officer since 2014 and became an LNHS Council Representative in 2015. Richard Arnold originates from north London but is now firmly settled in the south. He is the Regional Representative for the British Trust for Ornithology in south London and a professional ecological consultant at Thomson Ecology. He served on the council of the Chartered Institute of Ecology and Environmental Management (CIEEM) and helped develop CIEEM's guidelines on ecological impact assessment. Neil Smith trained as an ecologist, with an emphasis on botany and habitat surveying, and in doing so, developed an interest in the use of geographical information systems (GIS) in conservation and ecology. Neil currently works as a professional GIS consultant at Thomson Ecology. Neil managed the dataset and produced all the maps for The London Bird Atlas.