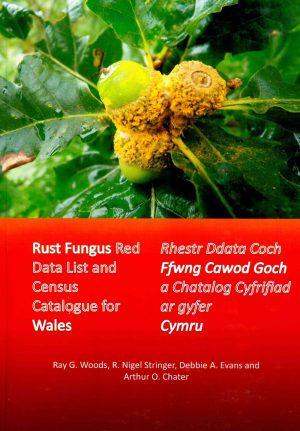 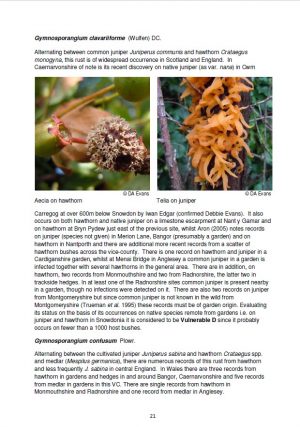 We have only a few copies left in stock

Share this book:
Rust Fungus Red Data List and Census Catalogue for Wales Authors: Chater Arthur , Evans Debbie , Stringer Nigel , Woods Ray Format: Paperback First Published: 2015/04/01 Published By: A. O. Chater Pages: 84 Illustrations and other contents: 48 colour illustrations Language: English ISBN: 9780956575012 Categories: Biodiversity & Conservation, Conservation, Mycology, fungi
Rust Fungus Red Data List and Census Catalogue for Wales provides not just a listing but notes with colour photographs on individual taxa. Some details on the locations of rare rusts of Wales are provided including host taxon, habitat and vice county in tabular form as well as more specific  details in the notes.
The rust fungi are a group of specialised plant pathogens. Conserving them seems to fly in the face
of reason. Yet as our population grows and food supplies become more precarious, controlling
pathogens of crop plants becomes more imperative. Breeding resistance genes into such plants has
proved to be the most cost effective solution. Such resistance genes evolve only in plants challenged
by pathogens. The authors hope this report will assist in prioritising the conservation of natural ecosystems
and traditional agro-ecosystems that are likely to be the richest sources of resistance genes. Despite
its small size (11% of mainland Britain) Wales has supported 225 rust fungi taxa (including 199
species) representing 78% of the total British mainland rust species. For the first time using widely
accepted international criteria and data collected from a number of mycologists and institutions, a
Welsh regional threat status is offered for all native Welsh rust taxa. The results are compared with
other published Red Lists for Wales. Information is also supplied in the form of a census catalogue,
detailing the rust taxa recorded from each of the 13 Welsh vice-counties.

£25.50
Unavailable
We use cookies to ensure that we give you the best experience on our website. If you continue to use this site we will assume that you are happy with it.Ok