Field Guide to the Moths of Great Britain and Ireland 3rd ed.

This latest edition of the Field Guide to the Moths of Great Britain and Ireland has been fully revised, updated and restructured, bringing it in line with the latest thinking in taxonomy. Moths are illustrated in their natural resting postures, and there are also paintings of different forms, underwings and other details to help with identification. New descriptions and illustrations have been included for species that have been newly recorded in Britain and Ireland since the last edition of the guide was published. The text descriptions of all other species – covering field characters and similar species, flight season, life cycle, larval foodplants, and habitat – have been revised and updated where necessary, and particular attention has been paid to updating the distribution information, which is now supported by maps. The revised general introduction explains how the methods of identifying and recording moths have evolved over recent years with the advent of new technologies and as a result of data analysis.

Paul Waring was born in the New Forest, Hampshire. A schoolboy interest in caterpillars led ultimately to Honours Zoology at the University of Oxford and a PhD on the impact of woodland management on the moth fauna of Bernwood Forest. Since 1987, Paul has worked full time on moth conservation in Britain, both within the government conservation agencies and as a freelancer, as well as mothing elsewhere throughout the world. He is based in Peterborough, and has authored over 1,000 papers and reports in scientific journals, including a regular report on moths in British Wildlife magazine for the last 20 years.

Quite simply the best in the field -- Caroline Moore * The Spectator * The first two editions were already established classics ... This brand-new edition maintains the brilliance of its predecessors (the finest illustrations and best text around) and enhances it with an impressive update -- James Lowen * Rare Bird Alert * There can be few moth enthusiasts without a well-thumbed copy of this book on their shelves. Whether you have an earlier version or not this edition has much new information, maintains the previous high standard, and is well worth adding to your library - it won't remain unread for long -- Graham Geen * BTO book reviews * If you are after just one tome on the larger moths of Britain and Ireland then this is it -- Mark Parsons * British Wildlife * It is hard work to find fault with this book ... Wholly reliable -- Colin Plant * Entomologist's Record and Journal of Variation * The most important book on moths published since Skinner... * British Birds * An excellent updated version of a well-loved guide -- Mark Young * Atropos *

Paul Waring was born in the New Forest. A schoolboy interest in caterpillars led to Honours Zoology at the University of Oxford and a PhD on the impact of woodland management in Bernwood Forest. Since 1987, he has worked full time on moth conservation in Britain, both within government conservation agencies and as a freelancer, as well as mothing throughout the world. Martin Townsend started specialising in Lepidoptera at the age of ten. He graduated with a BSc in Zoology from the University of Aberdeen in 1985, and since then has worked in ecological research and conservation. He is now an independent consultant, carrying out site surveys for conservation bodies and other landowners. Richard Lewington studied graphic design at the Berkshire College of Art, and since leaving in 1971 has specialised in natural-history illustration. His meticulous paintings are the mainstay of many of the modern classics of field-guide art. 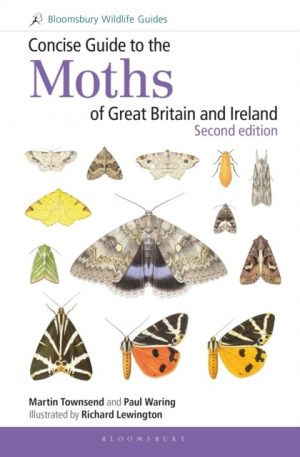