Corticoid fungi of Europe: volume 1 – Acanthobasidium-Gyrodontium (Synopsis Fungorum 43), is the first of a planned 3 volume series on the corticoid  fungi.  Corticioid fungi are basidiomycetes that form crust-like effused (resupinate) smooth fruitbodies on the underside of decaying wood and are usually found in forest communities. These form a diverse generally unrelated grouping, whose generally simple macromorphological features make them difficult to identify in the field and they are often not represented in guide books.

This new work includes a general introduction, key to genera and descriptions of genera (and species) from A-G.

Almost all species are illustrated with black and white drawings of microscopical characters. Some 50 species with conspicuous and/or coloured basidiocarps are also illustrated with colour pictures.

The mycological scope is wide, including all European wood inhabiting Homobasidiomycetes exclusive of Polyporaceae and Agaricaceae (in a wide sense) and totally some 850 species will be described and illustrated in the end.

The format of the books will be similar to the Poroid Fungi of Europe by Leif Ryvarden and I. Melo 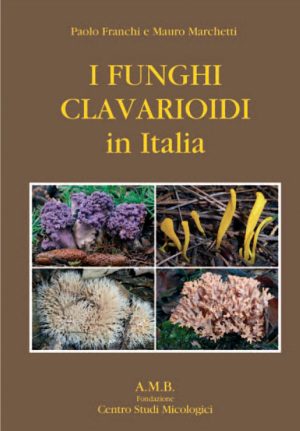 I Funghi Clavarioidi in Italia