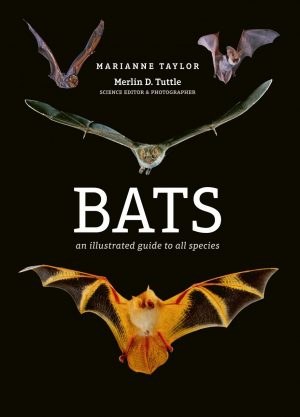 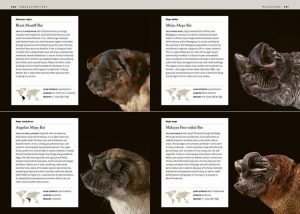 Bats: An illustrated Guide To All Species

A detailed examination of 300 or so of the more than 1,300 species known today. Nocturnal, fast-flying and secretive, they are endlessly fascinating, yet extremely difficult to observe and catalogue. The diversity of bats is both rich and underestimated and the threats they face from humans are very real.

This guide illuminates the world of bats and reveals their true nature as intelligent, social and deeply misunderstood creatures. This extravagantly illustrated handbook features the work of famed nature photographer Merlin D. Tuttle and in-depth profiles of 288 bats, from the Large Flying Fox, which has a wingspan of more than five feet, to the Bumblebee Bat, contender for the world’s smallest mammal.

Bats includes close-up images of these animals’ delicate and intricate forms and faces, each shaped by evolution to meet the demands of an extraordinarily specialized life, and a thorough introduction which explores their natural history and unique adaptations to life on the wing.

Review
… Meshing deft scientific text with Tuttles sumptuous images, its a superb introduction to the baroque morphologies and flying prowess of these beguiling beasts.”
Nature vol 567 (2019)

Marianne Taylor worked for seven years in natural history publishing, first at Bloomsbury and later at Birdwatch magazine, before becoming a writer. She has written more than twenty books for adults and children on a range of natural history subjects; her books include Bats, Owls, Hummingbirds (Ivy Press), the RSPB's British Birds of Prey, (A&C Black), Dragonflight (Bloomsbury), and The Nature Book (Michael O'Mara). Merlin D. Tuttle is an ecologist, wildlife photographer and conservationist who has studied bats and championed their preservation for half a century. He is known globally through his scientific discoveries, popular articles and beautiful photographs of bats. His work has been featured in expositions from Harvard University to the British Museum and in numerous feature articles that include the Wall Street Journal, The New Yorker and National Geographic. He currently directs Merlin Tuttle's Bat Conservation, which he founded after retiring from leading Bat Conservation International for 30 years.

How To Identify Birds