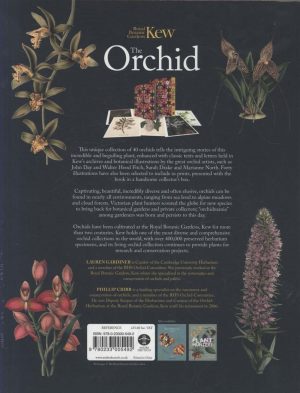 Produced in association with Royal Botanic Gardens, Kew, this collection of 40 orchids tells the many intriguing stories of this beguiling plant. It is enhanced with botanical illustrations by the great orchid artists, 40 of which have also been selected be included as prints and presented in a handsome collector’s box. Captivating, beautiful, incredibly diverse and often elusive, orchids can be found in nearly all environments, ranging from sea level to an elevation of almost 5,000 metres. Victorian plant hunters scoured the globe for new species to bring back for botanical gardens and private collectors; “orchidmania” among gardeners was born and persists to this day. Enhanced with notes and letters held in Kew’s archives and illustrations by artists such as John Day and Sarah Drake, this is an exceptionally beautiful book on an extraordinary plant.

Author Biography: Lauren Gardiner is Curator of the Cambridge University Herbarium and a member of the RHS Orchid Committee. She previously worked at the Royal Botanic Gardens, Kew, where she specialized in the conservation of Madagascan plants, including orchids and palms. Phillip Cribb is a leading specialist on the taxonomy and conservation of orchids. He was Deputy Keeper of the Herbarium and Curator of the Orchid Herbarium at the Royal Botanic Gardens, Kew, until his retirement in 2006. Royal Botanic Gardens, Kew is a world famous centre for botanic knowledge. It holds the most diverse living orchid collection in the world, and the largest and most comprehensive orchid herbarium, with over 400,000 specimens preserved.

£17.95
Out of Print
Recently Viewed Products
We use cookies to ensure that we give you the best experience on our website. If you continue to use this site we will assume that you are happy with it.Ok