Featuring the previously unpublished diary of Jose Maria Sobral, Under-Lieutenant of the Argentine Navy, this book provides insight on his life and his participation in Otto Nordenskjoeld’s Swedish Antarctic Expedition of 1901-1903. This biography highlights Sobral’s personal thoughts on the mission, his position, the science being discovered, and the geopolitical situation around him. The reader also learns about the state of science, Antarctic exploration, and cultural-political-issues at that time. The author’s critical and contextual analysis of the diary explains more about Sobral and his role in Argentina, Antarctica, science and history. This paints a detailed picture of Sobral as an individual, and provides the framework to depict the world in which Sobral lived and worked as well as his expedition and accomplishments. The book aims to explain the context of Sobral’s writings, the significance of the events he described in his diary entries, and the way all of these events tied into history and scientific discovery.

"The contrast between [the] extraordinary environmen tal beauty, dedicated work, hardship and interpersonal struggle make this an absorbing book which would be of great use to readers interested in the Heroic Age of Ant arctic exploration and to students of the period. Sobral's diary is an expression of the indomitability of the human spirit. It encapsulates the contemporary idea of Antarctica as a crucible, putting men to the ultimate test." (Patricia Millar, Polar Research, Vol. 38, 2019)

Mary R. Tahan is a writer, producer, and documentarian, with a professional background in journalism and marketing. Internationally renowned for her educational and informational series, she has authored many scholarly articles and historical books, and produced/directed documentary films. Her scholarly articles and lectures/presentations focus on Antarctica and the "heroic age of exploration", and cover many countries and she has documented individuals and organizations as well as cities and historical events. As part of her research for her series of films and books on Polar exploration, Mary R. Tahan traveled to Antarctica by invitation of the Direccion Nacional del Antartico (Instituto Antartico Argentino), where she performed on-site photography and videography of the Antarctic landscape and historical sites, as well as conducted interviews with scientists and curators. Her research has also taken her to Argentina, Norway, France, Russia, and England, where she has also interviewed Polar historians and descendants of the early explorers of the Arctic and Antarctic. Mary R. Tahan obtained her bachelors degree in English at the University of California at Los Angeles and participated in the UCLA masters program in Motion Pictures & Television, with an emphasis in Critical Studies. Her current memberships and activities include the Royal Geographical Society (with IBG); the Scientific Committee on Antarctic Research (SCAR) History, Humanities and Social Sciences Expert Group; Direccion Nacional del Antartico; Historiadores Antarticos Latinoamericanos; and the National Library of Norway. She was nominated as Honorary Historian with the Argentine Navy. 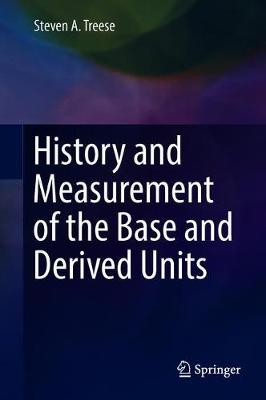 History and Measurement of the Base and Derived Units

£185.00
Currently Unavailable
We use cookies to ensure that we give you the best experience on our website. If you continue to use this site we will assume that you are happy with it.Ok